Just when I think my life is crazy, someone else comes along with a story that makes mine insignificant by comparison.  Such is the case with a fellow chaplain's spouse who is getting ready to move from Alaska to South Carolina this summer.  Somewhere in between the sorting, packing, selling, and buying an RV for their soon-to-be family of five, they are supposed to go to China to pick up number five...except they don't know when.  The dates range from the next four to twelve weeks.

We are having an "Adoption Shower" for her on Monday, so I thought I'd break out the dimensional stuff since I don't have to mail this card. 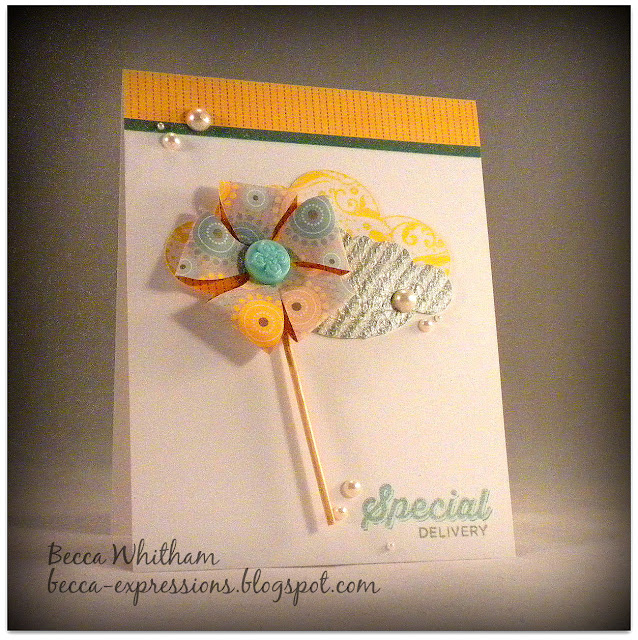 Everything is CTMH, but a few of them are retired (R).  Here's the supply list:
I started by searching for a 3-D pinwheel.  Since I only had flat ones, I decided to do something a little different and use the large, background one from Artiste then fold over the spokes.  It looks more like a flower, but I'm okay with that.  I wanted to put this on a lollipop stick but couldn't find one.  (I have them...I know I do...somewhere.)  Next best thing was to pull the decoration off a cupcake topper that had Hawaiian flip flop sandals on it. I taped the wooden stick to the pinwheel flower and put foam tape along either side. 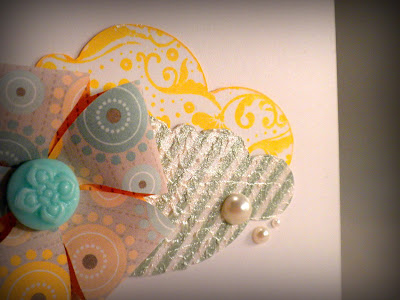 The clouds could have easily been cut with Georgie paper instead of stamped, but I wasn't sure I was going to like the pattern so I experimented with the stamps.  By the time I was done experimenting, I liked it well enough to use it.  The Whisper stripe cloud was a little to dark which is why I painted over it.  I "spounced" my paint brush for extra texture.

I also ran a marker along the edge of my Canary cloud for definition.

After the "too dark" cloud, I decided to use a second generation stamping for "Special" on the sentiment.  It's darker in real life than it looks in the picture.

My paper choice and card layout were chosen to enter Color My Heart and Retro Sketches.

Posted by Becca-expressions at 8:26 PM