On Veteran's Day, it's traditional to thank someone you know who is serving or has served. Today I'd like to turn that around and thank all of you for allowing my husband to serve in the army. 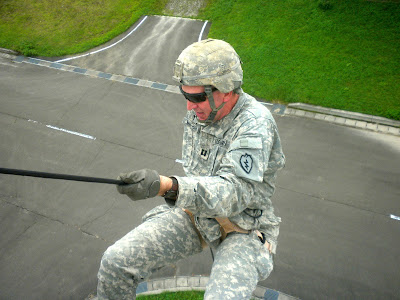 His military career started at an age when most are getting out rather than getting in, but several years ago the army needed chaplains so badly, they raised the age limit.  Nathan joined at forty-six. I tease and call it his mid-life crisis, but the truth is, this is the job God had been preparing him to fill all his life.

And he loves it.

Where else can a fifty-two year old man repel down a wall as part of his job? In Japan, no less!

We have lived in three different states so far, making dear friends and wonderful memories both inside and outside of the army. The two women most responsible for helping me get published were met along this journey--one in Colorado; the other in Oklahoma.

So, not only do I get to watch my husband literally glow with joy in his job, but I get to live--not just visit but live--in places all across the country so I can do setting research for stories and never have to go more than a few miles from home.

For that and much more, I thank you. It is our privilege to serve the fine men and women of the United States Army.

Until next time,
Becca
Posted by Becca-expressions at 1:41 PM