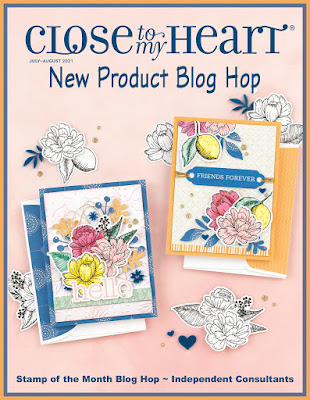 Welcome to the New Products Blog Hop for the July/August 2021 Seasonal Catalog. You should have come from Maureen's blog, but don't worry if you started here. The hop is a circle, so just keep going until you get back to where you started. If you get lost along the way, head over to Melinda's blog for a complete list of participants.

As soon as I saw this catalog, I fell in love with the Doodled Florals stamp set. I stamped a bunch of images and colored while watching TV. When I was done, I had a large pile of images ready to go. I went a little wild, so strap in and hang on... 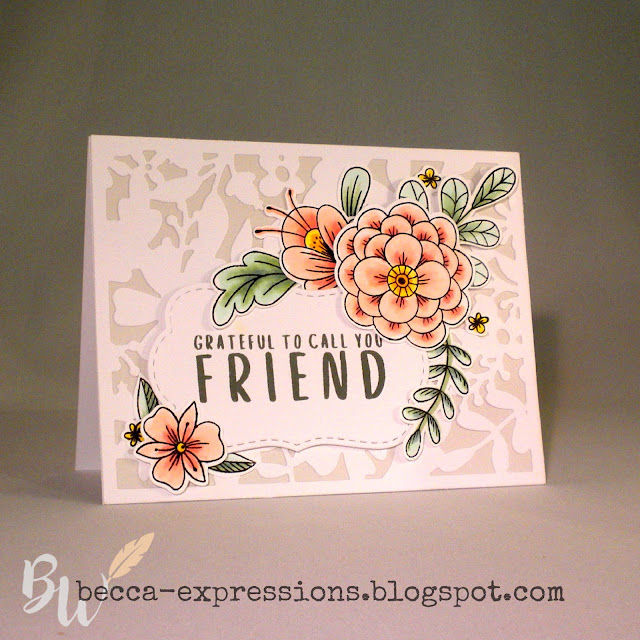 Here I paired the floral images with a sentiment from Every Bit of Wonderful, which is this year's Operation Smile stamp set. I stamped it in Charcoal on the largest Stitched Scalloped Brackets. I glued it to white paper cut with Floral Background Overlay backed with Linen cardstock. Have I mentioned recently how much I love Linen??? It's so classy!
For these next four cards, all sentiments come from the Seasonal Borders stamp set. 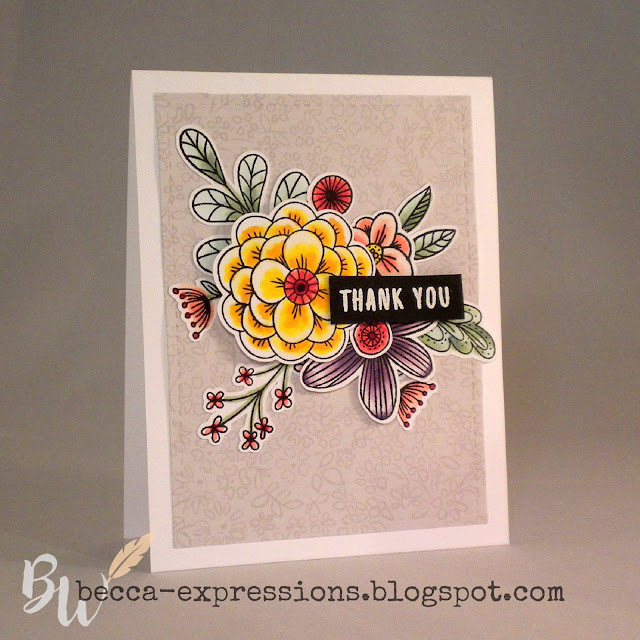 The background paper on the above card is from the new Mix-In paper. I cut it down using the largest Stitched Rectangle Thin Cut. The sentiment is white embossed on black paper and foam mounted. I also foam mounted some of the flowers for added dimension. 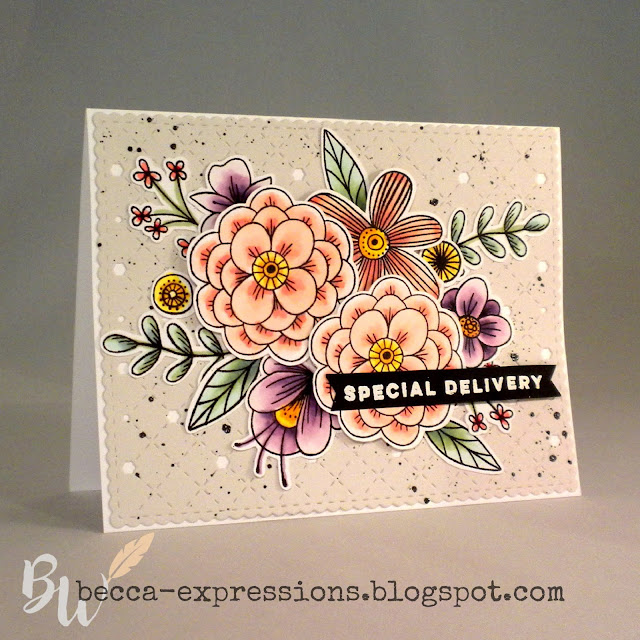 I used Linen paper again, this time running it through the Stitched Lattice Overlay Thin Cut. I flicked Black Shimmer Brush on it before adding it to the card base and layering the flowers over the top. I made liberal use of foam tape to add dimension to the flowers and sentiment banner. 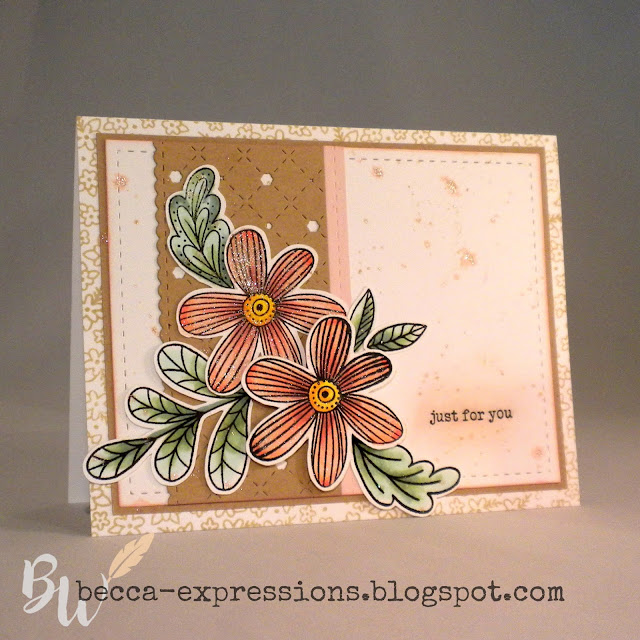 This one also uses Stitched Lattice Overlay (Kraft) and Stitched Rectangle Thin Cuts (Peach), but I cut them down to create my wide and thin bands which I glued to a piece of white cardstock cut with the largest Stitched Rectangle Thin Cut. I stamped my sentiment then sponged lightly with Peach ink to shade it. Then I flicked Peach Shimmer Brush over the entire background. When it was dry. I mounted it to another piece of Kraft paper cut to 4 x 5.25. Before gluing it to my card base, I stamped around the edges of the card in Almond ink. The flowers come from Seasonal Borders as does the sentiment. Once the flowers were glued or foam mounted, I went over them with more Peach Shimmer Brush. 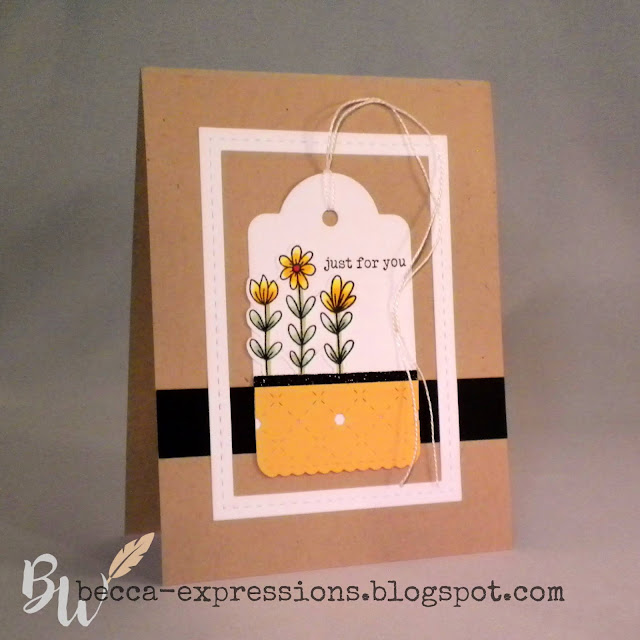 I've had this tag sitting in a pile of "I had a plan for this but it didn't happen and now I don't know what to do with it but I sure don't want to throw it a way" stuff. The tag is cut from Tags and Tabs Thin Cuts and overlayed with a scrap of Canary cardstock I ran through the Stitched Lattice Overlay Thin Cut, glued to the tag, and trimmed with Micro-tip Scissors. I added the flowers, then used a sliver of Black Glitter paper over the top. After threading some white embroidery thread through the tag hole, I secured ONLY the top to my Kraft card base. Then slid the black band underneath to line the top edge with the bottom edge of the Black Glitter paper. It creates a cool offset look. Then I glued down the bottom of the tag and added the frame made with the middle size Stitched Rectangle Thin Cuts around it.
I happen to love that there aren't any sentiments in this Doodled Florals set. I have plenty of those, the Seasonal Borders stamp set being the tip of that particular iceberg.
Speaking of Seasonal Borders... We're nearing the end of the current Core Catalog. Every stamp set, including Seasonal Borders, is retiring. So are all of the overlay thin cuts. The Stitched Rectangle Thin Cuts are staying (thank heavens!), but any of the ones that cover a card front are retiring. Also retiring are the Stitched Scallop Bracket Thin Cuts (first card). All retiring items are now available only while supplies last, so if you see something you have to have, get it quickly!!
Next stop on the blog hop is Brandi' R's crzy4scrapbooking. Again, the hop is a circle, so be sure you visit everyone to glean lots of great inspiration.
Until next time,
Becca

Posted by Becca-expressions at 9:00 PM