Today we are taking a break from the book tour to do a little sight seeing...if you can call going to Mammoth Cave in Kentucky a little sight.  With almost 400 miles (yes MILES) of discovered caves and an estimated 400 more left to be discovered (based on air currents), it is the largest cave/cavern system in the world.

Which ties in perfectly with the challenge over at OWH.  What could be more masculine than digging around in the dirt?

The stamps are CTMH You & Me set (discontinued).  The B&T paper is K&Company (I think...not at home to check).  The sparkles and star are also CTMH.

I planned to use some cork numbers for the 17 but couldn't find them, so I cut my own out of a leftover piece of kraft cardstock, stamped them, and sponged them in black.  I should have cut them using my Cricut but I was too...I don't know.  Too something.  Anyway, they came out okay.  I've been seeing a lot of cards with either large letters or numbers on them and wanted to try my own version.

I love the kraft and black together with just a hint of red.  I only threw it in there because the actual ticket I used had some on it and I didn't want it to feel lonely.

I will have to wait to post pictures of Mammoth Cave because my pixels are too large and it's taking too long to download.  I've already lost my connection twice at the RV park where we are staying, so I'd better post this quick before I lose it again.

Posted by Becca-expressions at 5:16 PM 6 comments: Links to this post

I'm heading out to Georgia this morning for a book tour.  Yes, an honest-to-goodness book tour...just not mine.  Gotcha!  My precious friends are promoting their books No Safe Haven and Race Against Time.  In preparation for the trip, I had to make a couple birthday cards.  This first one sorta, kinda follows the OWH Color Challenge.  Sorta.  Hey...it has yellow and green in it!  This also fits into the Heart 2 Heart: Embossing Technique Challenge.

Stamps are from CTMH's Pemberley Workshop on the Go.  I love, love, love this swirly stamp and knew I wanted to try an emboss resist technique with it.  I find I get a better resist if I use clear embossing powder as opposed to white, but either will work.  I used CTMH ink in Honey, Spring Green, Crystal Blue and Hollyhock.  The pins are also from CTMH although discontinued now.  The sentiment is from the Art Philosophy set.

The ribbon is from Hobby Lobby (of course!!),and the pearls are from Michaels (I made them curl on my own).

Oh...and in other news, for the first time since I started this blog I can report that I have lost weight.  I'm not keeping track precisely because I'm trying to focus on just eating well and exercising regularly.  BUT, I am going to need new pants soon!!

Well, gotta run.  I have a few things left to pack before heading to the airport.

Until next time,
Becca
Posted by Becca-expressions at 8:50 AM 16 comments: Links to this post

For too many of us, feelings dictate our lives.  Me included foremost of all.  For us, feeling is fact.  But truth says feelings are feelings, nothing more and nothing less.

Over the past few weeks, this problem of feelings versus facts has been brought home to me culminating in my husband's sermon this morning on forgiving ourselves.  I wish you all could have heard him this morning, but I'll sum it up.  If I ask, "How can I forgive myself for ________?" I am asking an erroneous question.  The real question is, "Do I believe God?"  Because God's word tells us:


There are more, but you get the idea.  The point is, if we have accepted the gift of salvation through Christ's crucifixion, we are forgiven. Period. End of discussion.  To ask how we can forgive ourselves is, in essence, saying that Christ's atonement covered everything except this one thing...this thing for which I feel no forgiveness.  Because if I don't feel forgiven, I can't be forgiven.  Right?
Wrong.  On two counts.
First, Christ's atonement covered every sin. Every. Single. One. And it doesn't matter if you believe it or not, it did.  The question is, whether we are talking about forgiveness of sins for eternal salvation or forgiveness for those sins we commit after salvation, do we believe it?  Do we act in accordance with the truth?  Regardless of our feelings.  Because the second error is that how we feel determines the truth.
Take, for example, someone who can't forgive themselves for not loving their parents.  Well...here again we have two errors:  1) the Bible doesn't command that we love our parents, it commands that we HONOR them, and 2) whether you feel like honoring your parents is irrelevant, the determining factor is your actions.
(Now for those of you who have heard that "honor" requires a child to submit to every demand of a parent, do not twist--or allow someone else to twist--Biblical truth here.  God's word does not condone abuse in the name of "honoring" a parent.  Never has.  Never will.  But it is not abuse to require a child to do some work.  And again, I hear, "But it can be!" roaring from the mouths of those who tend hurting children.  Well, of course it can be.  Anything taken to extremes can be a form of abuse...and is a topic for a whole different discussion.  For now, let's agree that what I'm talking about here is honoring a parent who is not asking their child to do anything illegal or immoral.  Or honoring elderly parents who need special care.  Or honoring parents by not verbally assassinating their character.)
There is a parable in the Bible about two sons. The father comes to both asking them to help harvest the fields.  The first son says he isn't coming, but shows up anyway.  His feelings were dishonoring, but his final action was obedience/honor.  The second son says he will come, but doesn't show.  He had every intention/feeling to obey, but his actions were disobedient.  The first son, the one who acted regardless of his feelings, is the one Jesus holds up as the right one. (Mt. 21:28-31)
So, getting back to our person who can't feel forgiveness for not feeling loving, he is tied in a knot over feelings which he has taken to be facts.  Instead, he needs to judge himself against the truth.  First, if he has not honored his parents in actions, he needs to agree with God that this is a sin (confession) and go forward acting out honor regardless of how he feels about it.  Second, he needs to hold his feelings up to the light of truth.  Every time guilt attacks, he needs to repeat Biblical truth either about how every sin has been forgiven or how actions determine obedience, not feelings.
Because feelings are not facts.
Feelings are not facts.
Feelings are NOT facts...
Until next time,
Becca
Posted by Becca-expressions at 4:45 PM No comments: Links to this post

I love it when, unbeknown to me, I do something that fits right in with a card challenge.  Last night I was cleaning up my stamp area by using up scraps (yes, every once in a great while I actually DO clean!), and I made this card:

Today, I saw that Operation Write Home is having a "Miss You" challenge.   The funny thing is that, when I first "finished" the card, there was no sentiment.  Then I thought to myself, "You can't have a card with NO stamping on the front," so I grabbed a sentiment set and, at random, chose the "i miss you."  That's card karma!!

Paper and stamps are from CTMH.  The lace ribbon was a new purchase from Hobby Lobby, and the embossing folder is from Cuttlebug.

I was on a roll last night, so I'll be posting more cards soon.

Until next time,
Becca
Posted by Becca-expressions at 11:40 AM 7 comments: Links to this post

Under the Wire Anniversary Mojo

My sister-in-law has been here all week, and she came to write. So write we did.  Which means I got little else done.  However, this same sister-in-law has an anniversary coming up soon.  It's not often that I get a chance to make one of those cards that would take a fortune to mail and hand deliver it to someone who lives six states away.  Using the Mojo Monday #231 I came up with this card:

Stamps are from CTMH Soul Mates (now discontinued which makes me sad for the rest of you but glad I got mine).

The "awning" on the tag was one of those what-would-happen-if things. I had a little bit of the paper lace left after adding the bottom border and thought I would give it a whirl.  Because there was a long "tail" left over after fan folding it, I was able to tie the knot around it and then cut off the excess.  I secured it onto the tag with Liquid Glass.  Kinda like it!

I used Momento Tuxedo Black ink to stamp on the ribbon.  I thought about embossing it to make sure the image stayed sharp, but I'm pretty sure this particular ribbon would have melted.

We were watching "Galaxy Quest" while I made this, and it took me the entire movie to complete the card. The only problem was, when the movie was over and the card was inside its envelope, I realized I forgot to sign it.  Uh, duh!!

Good thing my sister-in-law loves me! 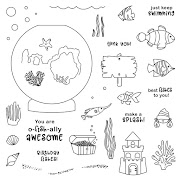 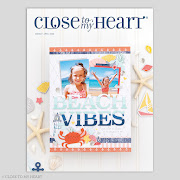