I combined three challenges for today's card: Color Throwdown, Freshly Made Sketches, and Heart2Heart (although I used a butterfly instead of "Birds or Bees" because it's all I had this far away from home). 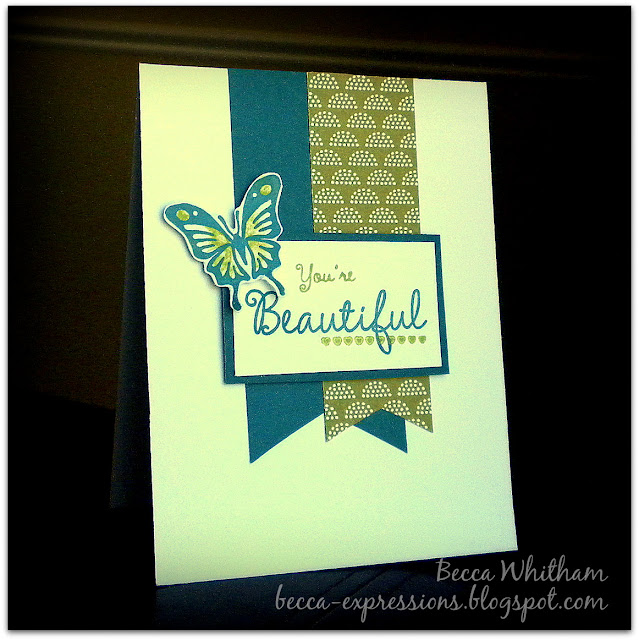 Everything is CTMH. Here's the supply list:
I stamped the line of hearts after the card was assembled using my MISTI. I had to press harder on the edge that was more angled because of the foam tape. That's why the hearts do that weird shadow-edged thing.  Most of the time, I'd tear the whole thing off and start over, but I kinda like it.

For the coloring, I painted with pigment ink because, again, it's all I have right now.  I dabbed a line of Fern on the edge of small bowl, wet my brush with plain water, and painted the butterfly. It gave me a mottled look instead of smooth one.

This is for a dear friend who just needed to be reminded of this simple truth today.  I know I need to hear it once in a while. How about you?

Until next time,
Becca
Posted by Becca-expressions at 12:57 PM 8 comments: Links to this post

I love the bright, bold colors chosen for this week's Color My Heart Challenge: Gypsy, Lagoon, and White Daisy.  And I love the idea of combing bold with "Delicate" which is this week's Addicted to CAS challenge.  I put the CTMH Artistry cartridge back to work for this card: 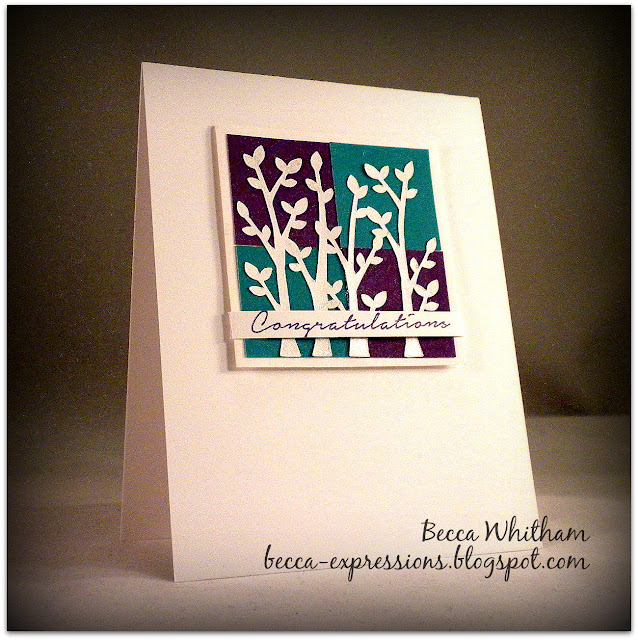 I forgot to measure, and I don't have the card to do it after the fact, but I think the squares are 1.25" square, so the color blocking is 2.5x2.5" mounted on 2.75x2.75" White Daisy base.  The trees were cut with my Cricut, glued down, then painted over with shimmer paint although you can't see it in the picture. The sentiment is from CTMH "Shower Flowers" stamped in Gypsy then trimmed down after the fact to get the thinnest possible strip.  It would have been fun to let the edges of this hang over a bit and snip a "V" in each end, too.

After the center block was done, I mounted it on a single layer of foam tape and attached it to the card base.  I'm a big fan of the white on white mounting because it adds interest without adding bulk.  I can easily see this with a second, thicker white mat similar to how I did this card.

A writer friend was recently nominated for a RITA award.  She gave me credit in her "Acknowledgements" for helping her brainstorm the book.  I was touched because I felt like I did so little.  This card is for her.

Until next time,
Becca
Posted by Becca-expressions at 9:06 AM 8 comments: Links to this post 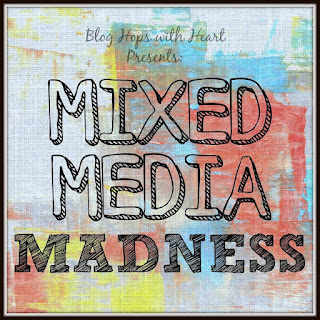 Army wives are always having a "coffee."  That doesn't mean there's actual coffee involved, but it's what get-togethers have been called since...well...I don't know how long.  Anyway, one of the things I've done with coffee groups is go to the painting studio.  The problem is, I paid around $40 for something I won't hang on my wall.

So, when the Blog Hops With Heart gals decided to do a mixed media project, I decided it was time to cover what I won't use and see if I could come up with something I would.  Before I got started, I did some blog hopping and ran across this. I used it as inspiration to come up with these: 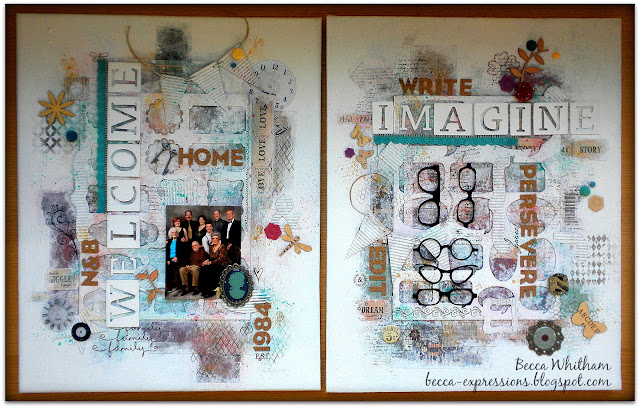 Here are a few "how to" pictures. (NOTE: I only got two of the three pictures done, but I'm planning a third soon.) 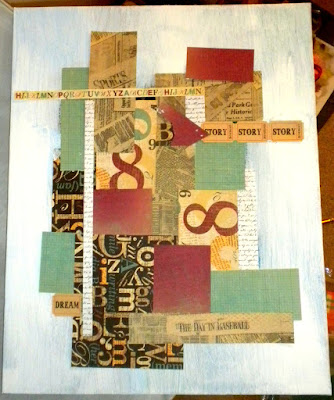 I started by doing a light wash of white paint then gluing some background and texture papers onto the paintings. Next came the chipboard cut-outs. 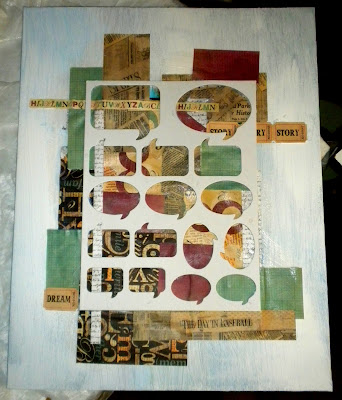 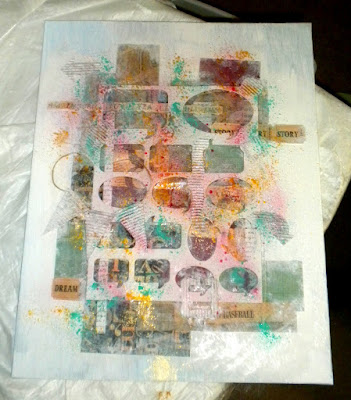 After the main chipboard was down, I added a banner and some other kraft-colored shapes.  I dabbed white paint on the kraft-colored images and around the edges of my background and texture paper. Next, I splotched a bunch of paint colors so the overall picture had more color, then added more white paint to tone down anything too bright. I stamped a few background images, but I didn't mount the stamps on blocks.  I was intentionally random both in the inking and stamping. Then, it was time to add accessories. I used rub-ons, stickers, and metallic and resin pieces that, if you put them on a card, need special envelopes and extra postage so they tend to build up in my stash of stuff.  I went hog wild!! 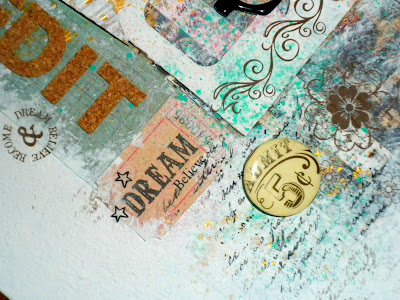 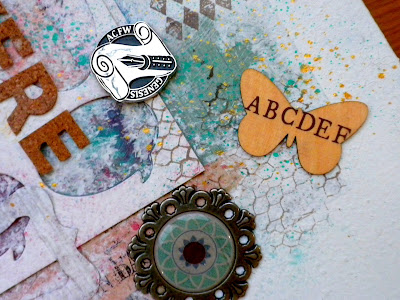 I used up so many supplies, I actually threw out some of the packaging. The best part was dressing up the various wood pieces and picture frame using my theme for the overall piece. I used rub-ons to add letters on the butterfly on my "writing" picture, but the dragonfly on the "home and family" picture has X's and O's to amplify my love theme. My "writing" picture was a great place to display my pin for being a finalist in a writing contest. It's been sitting on a shelf and now I can showcase it or wear it when I go to conference.

I'm now officially hooked on this whole Mixed Media thing. My favorite part of these particular pictures is that most of the chipboard pieces I used were what's leftover after you used the main pieces.

No...I take that back.  My favorite part is that, for about the same amount I paid for one picture, I will have three pictures to proudly display.

You should have come from Kelly's blog and are now headed to Amie's blog.  We're the only three on this hop, but what we lack in length we make up for in inspiration!

Until next time,
Becca
Posted by Becca-expressions at 5:00 PM 4 comments: Links to this post

Email ThisBlogThis!Share to TwitterShare to FacebookShare to Pinterest
Labels: Blog Hops with Heart

Have I mentioned how much fun I'm having with the CTMH Artistry cartridge?  Maybe once or twice...or a little bit more?!  Well, I am. And I used it again, along with the colors for this weeks Color My Heart Challenge, on these hats to create a fun birthday card. 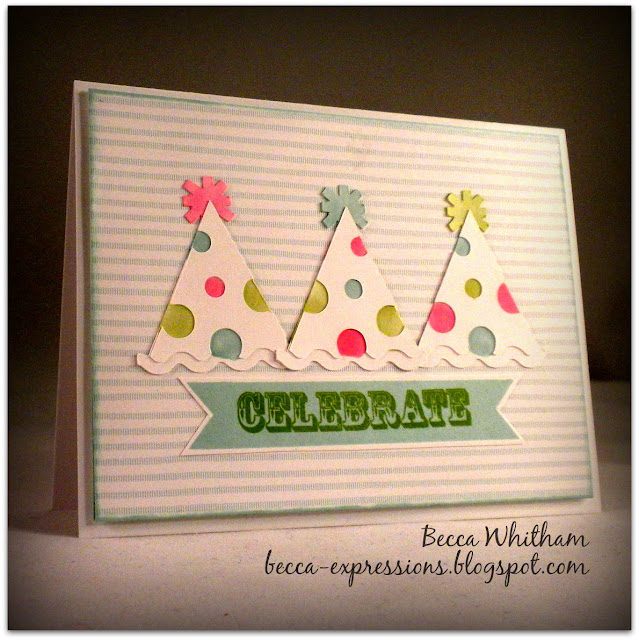 I cut both the top and bottom layers of the hats in white, drew a faint line with a pencil so I could sponge color on the bottom layer and have it show through the holes of the top layer in the right place.  To give a tiny bit of added interest, I flipped the top layer of the center hat so the holes were in a slightly different place.

The background paper is from "Penelope" with additional sponging in Glacier around the edges to give more definition.

Super simple, but that's what I love so much about this cartridge. Which I might have mentioned before. Once or twice.

Until next time,
Becca
Posted by Becca-expressions at 8:46 AM 5 comments: Links to this post

I don't normally post links to my author page on this blog, but I did something fun over there and thought some of you might be interested.  The published version of my latest novella, "Cowboy Competition," has a different ending than the one I originally wrote.  I've posted the original ending on my author blog.  (NOTE: You'll probably want to wait to read it until after you've read the published version.)

I'd love to hear what you think!

Until next time,
Becca
Posted by Becca-expressions at 10:03 AM No comments: Links to this post

Okay...let's just say it up front.  The latest Cricut cartridge from Close to my Heart is THE BOMB! 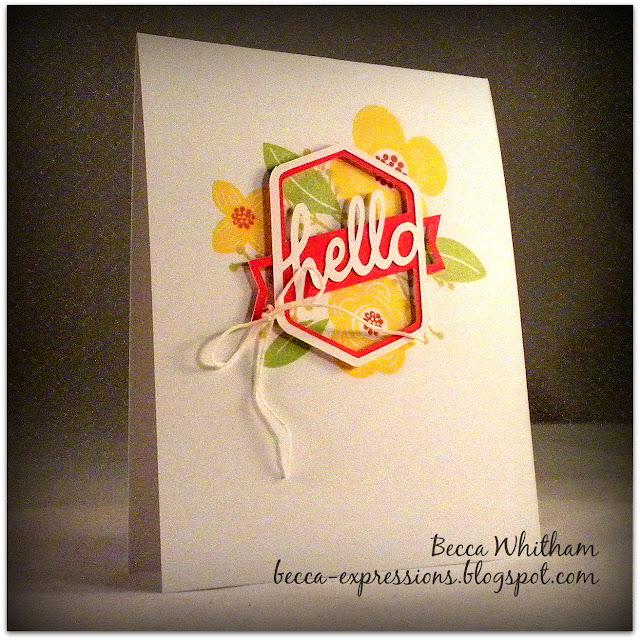 I stamped "Shower Flowers" in Canary, Smoothie, Flaxen and Sweet Leaf, this week's challenge from Color My Heart.  I topped it with the "hello" sentiment from Artistry in Smoothie and White Daisy.  After the sentiment was down, I added a bow.

So simple, but it ranks in the top five of all the cards I've made this year.

Until next time,
Becca
Posted by Becca-expressions at 9:01 AM 4 comments: Links to this post 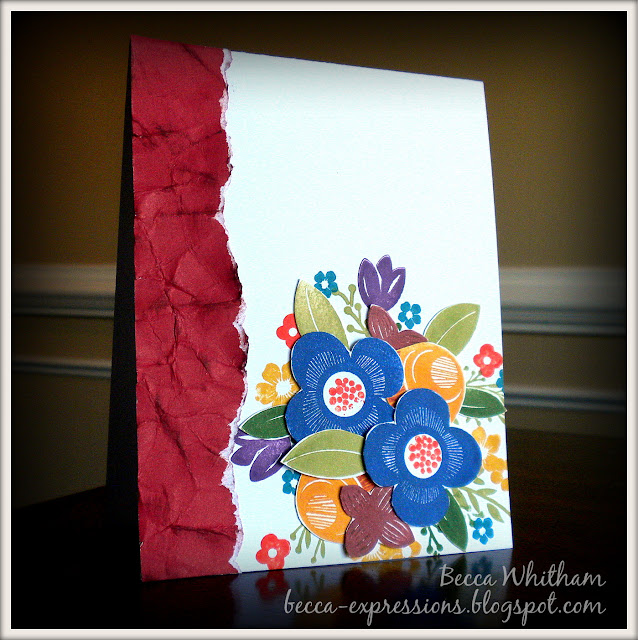 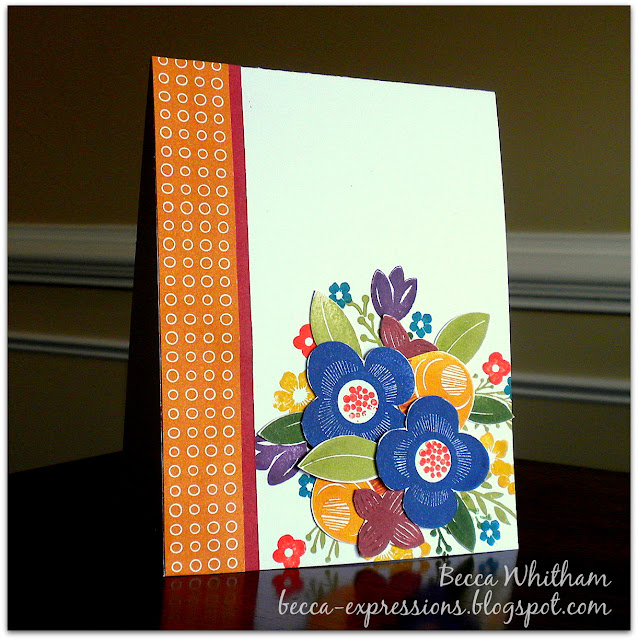 Until next time,
Becca
Posted by Becca-expressions at 10:34 AM 2 comments: Links to this post

I am having so much fun with the new CTMH Artistry Cartridge!  I made this cute Easter card by welding a few shapes together and adding a bunny over top. 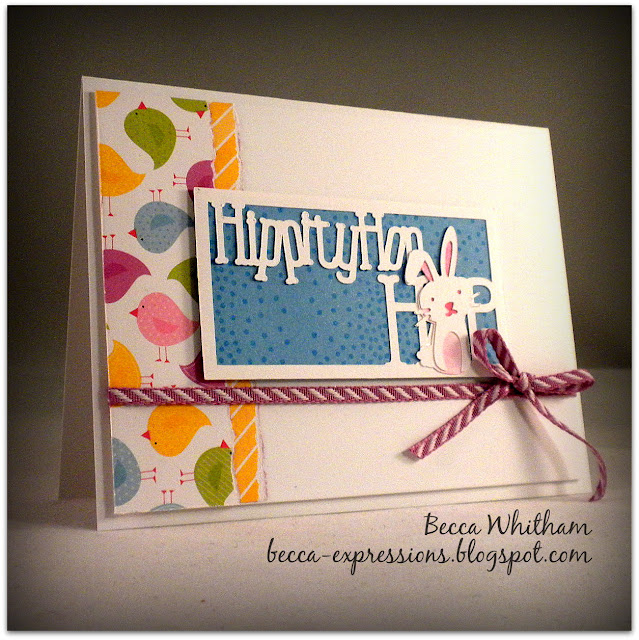 I used the Penelope paper pack, which allows me to enter this week's Color My Heart challenge, then did a little tone-on-tone stamping for the background of the sentiment panel using the small dots in the stamp set "Packages, Tags, & Boxes."  I'm finding lots of uses for that stamp set and the dots in particular!

Both layers of the bunny were cut in white.  I then sponged color on his tummy, face, and ears in varying degrees of intensity.

Until next time,
Becca
Posted by Becca-expressions at 11:21 AM 6 comments: Links to this post

Really quick post today as I have a thousand things to do before my flight this evening.  I'm playing along with the Heart2Heart "Three" challenge.  I chose three different paper packs from CTMH (all retired) and cut them into three banners. 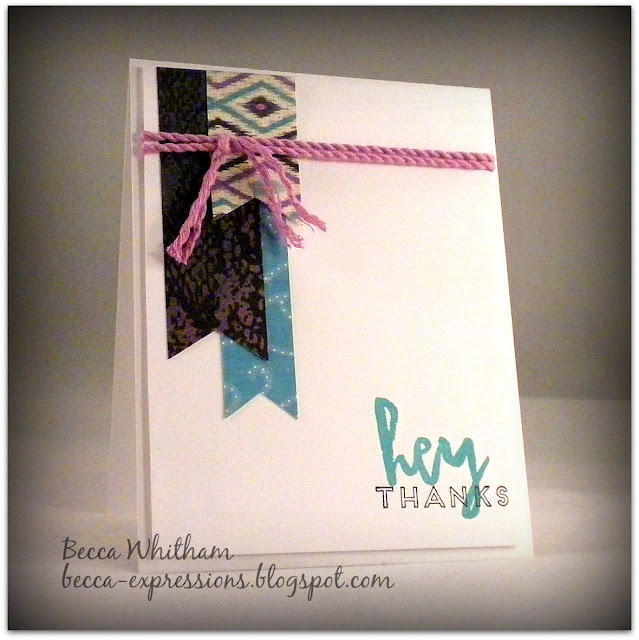 Nothing earth-shattering about this idea, but sometimes simple is just what you need to "get-her-done."

Until next time,
Becca
Posted by Becca-expressions at 10:47 AM 3 comments: Links to this post 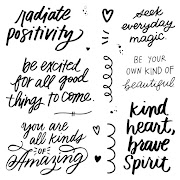 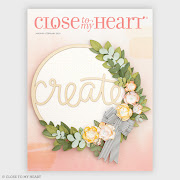