Even if it weren't for all the moving we do with the army, I'm at the point in my life where I'm trying to unclutter rather than accumulate. However, once in a while there's something given to me with deep sentimental value. This summer as we were making our way from Alaska to South Carolina, we stopped at my sister's home. She's collected teacups and saucers for years. One of them has a pattern of cross-stitched roses. Before I got into stamping, I was an avid cross-stitcher, making that particular cup my favorite of hers.

So she gave it to me. 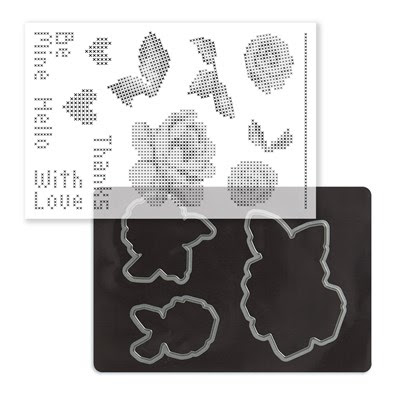 When CTMH's latest Seasonal Expressions catalog came out, the first stamp and thin cut set that went on my shopping list was Cross Stitch Love. (NOTE: Everything in italics is linked for your shopping convenience.) I sat down and played with the set last night and came up with several cards which I'll be sharing the next few days. Here's the first one along with the teacup that inspired it... 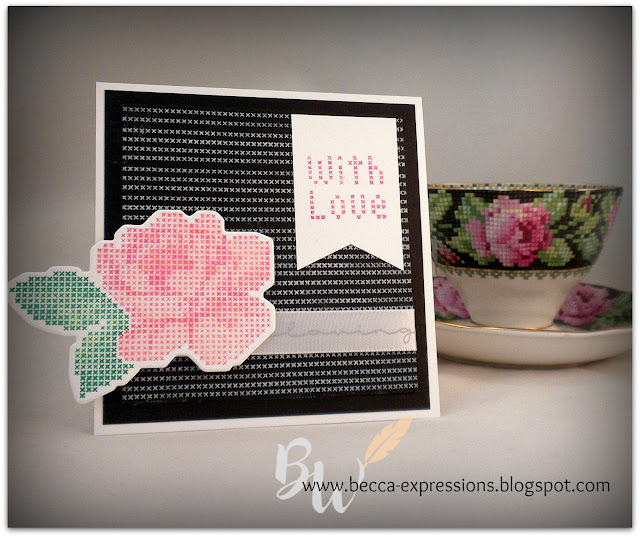 I used Raspberry and Emerald ink. The rose and leaf stamps are designed so the variation in shading is automatic when you stamp. Sooo cool! I did go over them with a light pen just to add a little more color.

In order to get the leaf and flower lined up perfectly with the thin cut die, I started by stamping the flower. I lined up the die cut and ran it through my Cuttlebug. I used the negative space left after the cut as a guide, laying it inside my MISTI and then placing the leaf stamp down. I closed the MISTI lid to stick the leaf stamp to it, then put the stamped rose cut in the negative space, inked the leaf, and stamped it in place. Worked perfectly.

I also used the MISTI to create the background using the single line of cross-stitching and White Daisy pigment ink on Black cardstock. (FYI, White Daisy ink requires refreshing, so be sure to order the coordinating White Daisy re-inker and add a few drops whenever you stop getting a crisp, white image.) It was a bit painstaking to create the background but easy once I got going. Pigment ink requires a much longer drying time, so I had to be patient before cutting it down to 3.5 x 3.5, wrapping Basics Ribbon around it,  and mounting it on a 4 x 4 piece of plain Black cardstock. I cut White Daisy cardstock into 4.25 x 8.5 and folded it in half for my card base.  I mounted the flower with foam tape off the edge - a really fun technique to use with square cards which still allows you to send the card in a standard A2 envelope. The final touch was creating a banner with more White Daisy cardstock and Raspberry inked sentiment.

The teacup sits in my kitchen window as a precious reminder of my sister who's on the opposite coast of the US from me now. I'll be sending her this card to tell her how much I love her and my teacup.

Until next time,
Becca
Posted by Becca-expressions at 2:56 PM