Happy Thanksgiving!  I hope this day reminds you of the many blessings in your life.  I am in Georgia celebrating with our son.  It's the first Thanksgiving we've celebrated with at least one of our children in many, many years. I'm feeling very thankful, indeed.

Last week I promised my Stampin' Buds design team post would include some non-Christmas cards with the Yuletide WOTG.  I don't know about you, but I want to stretch my stamps as far as they will go.  I started by cutting a bunch of tickets from p. 57 of the Artbooking Cricut Cartridge in White Daisy and stamping them with various ticket images from the set.  Then I cut and/or colored them to fit my cards. 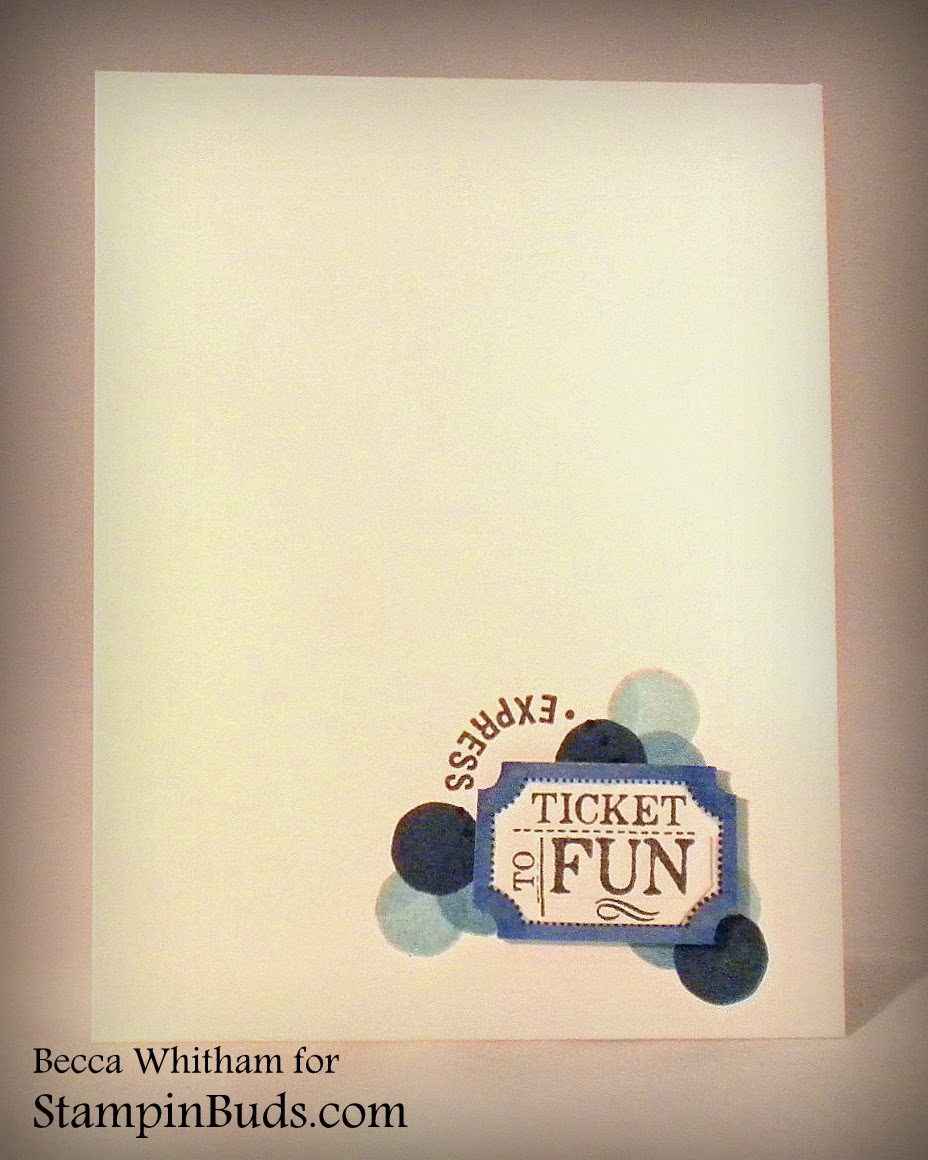 Here's the first one:

This is a variation of the second card from last week's post.

I altered the ticket by cutting the word "FUN" and bottom swirl from one image and mounting it over top of the "Ticket to the North Pole" image.  I colored the rim of the ticket shape with a marker to give it a border, but it very easily could have been left white.

The dots behind the ticket were made by stamping the back side of the "Dec 25" stamp in Pacifica three times without re-inking in between.  Sorry that the color didn't show up well.

Very simple and could be altered for any occasion and color scheme. 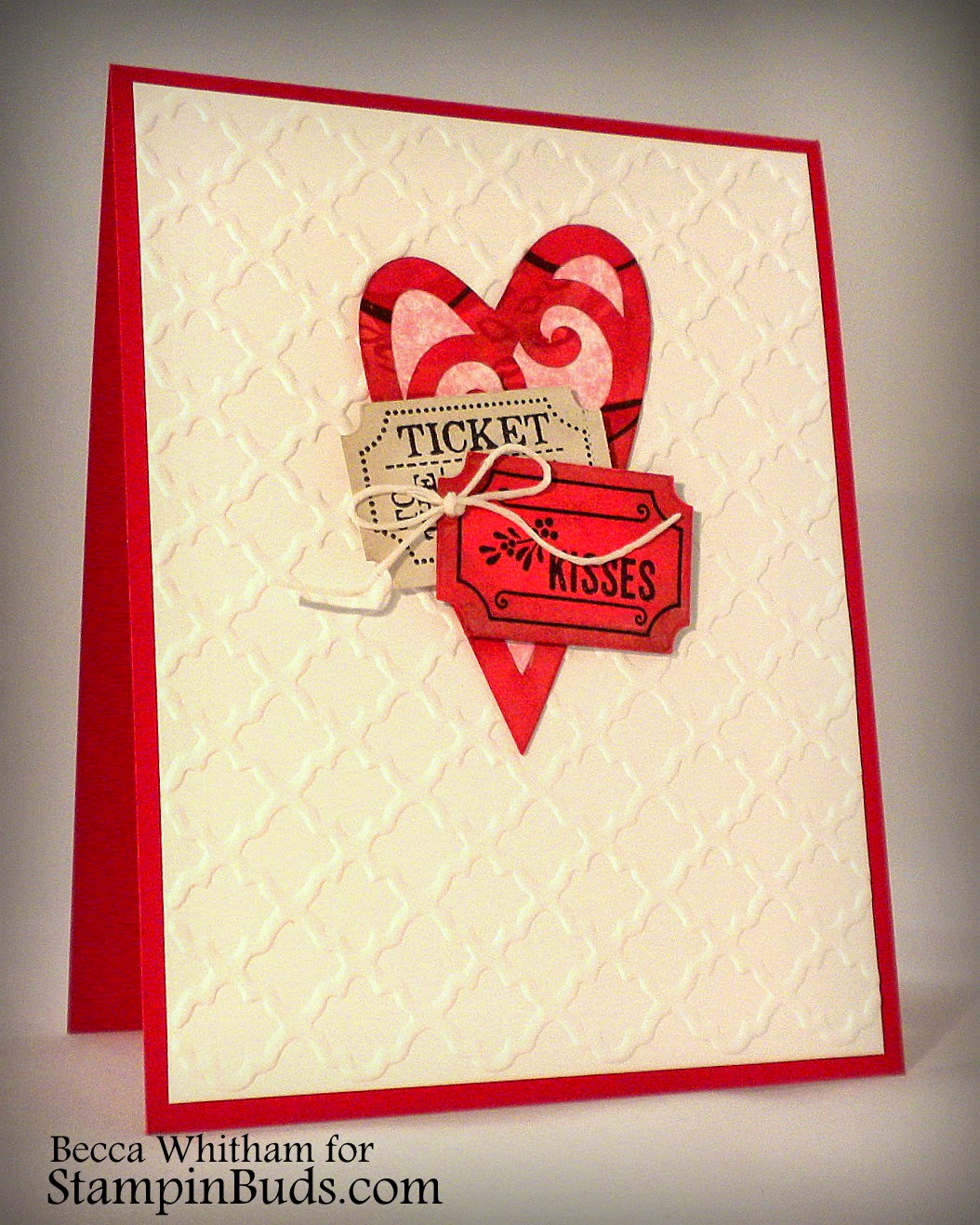 My second card makes use of layering one ticket over the top of another in order to get an entirely different saying.  I did lots of other altering on this, too.  The heart is cut from Art Philosophy at 3" tall.  The top layer is from the "Brushed" paper packet, and the bottom is Pixie cardstock. I sanded the Pixie layer to expose the white core, and I colored the Brushed paper with a red pen to tone down the pattern and to make it match the "kisses" ticket.  The other ticket was colored in gray so it would stand out from the white background but not add another color.  Again, my photography doesn't do the colors justice on this. 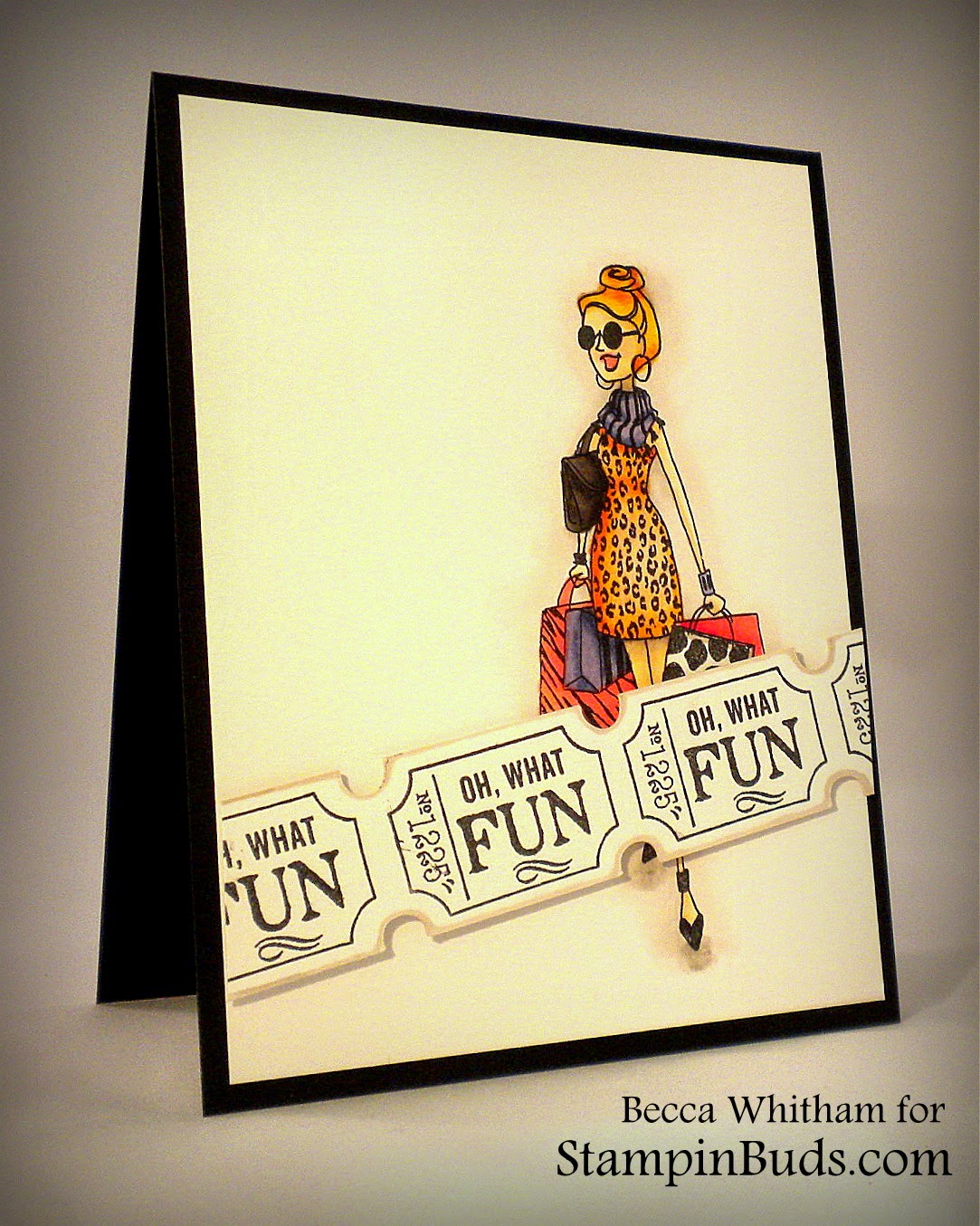 The final card is my absolute favorite (so I'm going to link it up to Heart2Heart's "No Rules" challenge).  I could play with this same design and do a gazillion different cards with it.

Instead of the woman with shopping bags (hostess only set, so no link below), anything tall could go behind that layer of tickets for different occasions.  For example, using the Artbooking cartridge, the giraffe from p. 50 (baby), the snowman from p. 77, the stack of presents from p. 86, or the cupcake with candle from p. 87 (birthday).  Switching to the Artiste cartridge, there's the Eiffle Tower on p. 42, the Christmas ornaments on p. 53, the spaceship and robot on p. 68, the hot air balloon on p. 70, or the skeleton on p. 76.  I could keep going, but you get the idea.

If you had a shorter image, you could put background and texture paper along the bottom angled to match the tickets and it opens up a whole new set of possibilities.  A ticket that says, "Oh, what FUN" can be used for so many occasions.

In a week, I'll be showing you some ideas from the new seasonal catalog.  Oh, what FUN!

InLinkz.com
Posted by Becca-expressions at 9:52 AM