GRATEful for You Card with CTMH Gimme Some Sugar - Cardmaking

While watching the Super Bowl, I colored images from the Gimme Some Sugar - Cardmaking stamp set which I'm now turning into thank you cards. 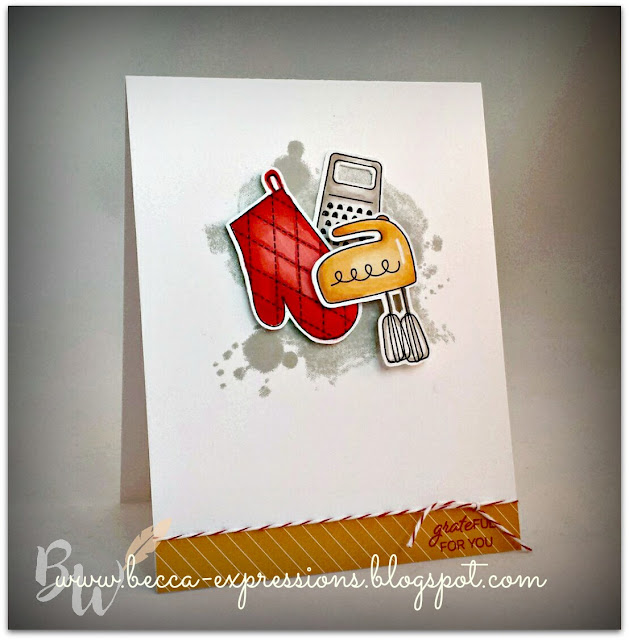 I wanted to participate in another Team Challenge from my upline, so I used Saffron, Ruby, and Mink as my color scheme. I began by stamping the background in Mink using the Splash of Color stamp set. I stamped the larger blob (yes, that's the technical term) once then the small, splotchy blob three times in a triangle pattern: one below the thumb of the mitt, one between the mitt and the grater, and one behind the body of the mixer. I stamped each of the small, splotchy blobs a second time directly over the first image to give it a deeper layer of color. Since they were splotches, I wasn't fanatically worried about getting them lined up. Good enough was good enough.

The images from Gimme Some Sugar - Cardmaking were colored with a variety of Copic markers. I added the shine on the mixer with a white gel pen. I mounted the images with various levels of depth. The grater is glued directly to the card base, the oven mitt has one layer of foam tape, and the mixer has two layers of foam tape except where it overlaps the oven mitt.

To finish off the card, I added a .5 x 4.25 strip of Saffron from the Enchantment Fundamentals Paper Packet along the bottom of the card base. I stamped the sentiment, also from Gimme Some Sugar - Cardmaking, in Ruby ink then used some long retired baker's twine as my only embellishment.

I finished enough images to make about five of these cards. They are all different colors, though, because...well, just because I wanted to. And yes, there's a technical term for that, too, but I'm not sharing it with you. I think you can probably figure it out for yourself. LOL!

Until next time,
Becca
Posted by Becca-expressions at 1:39 PM