As promised yesterday, here's another card using the Decorative Border Thin Cuts and the September Stamp of the Month (SOM) Just Treats. 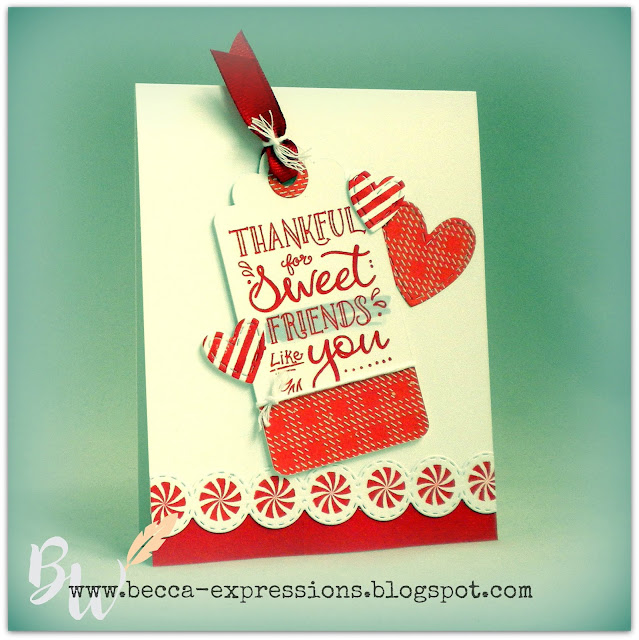 I went with a traditional red and white color scheme for this card using the new Candy Apple color and 'Tis the Season Paper Pack. Remember yesterday when I talked about the fun things to do with the striped border included in the Just Treats SOM set? Well, those striped hearts were made by stamping that border twice (because once wasn't quite wide enough for the smallest heart thin cut). The other fun thing I did was to cut the scallop border from White Daisy cardstock, flip the border over and line it up so I ended up with a border of stitched circles...and wonder of wonders, the inside of the peppermint candy fit inside perfectly. It's almost like I planned it, which I didn't (but maybe the genius designers at CTMH did).

The tag was cut using an image from Artiste, which is retired but still wonderful. I dressed it up by adding some of the 'Tis the Season paper along the bottom and trimming off the excess with scissors. I also made my own ring to go around the opening of the tag. I simply used the "Hide Contour" button in Design Space to get rid of the outside edge of the tag (leaving me with only the center hole) then used the "Shapes" button to add a circle, size it to a bit larger than the center hole, used the "Slice" feature to cut the smaller circle out of the larger one, and then cut using the patterned paper. The only non-CTMH thing on this card is the wider red ribbon which is tied with White Twine at the top of the tag. I also used White Twine along the bottom of the tag between the white space and the red bottom border.

For the sake of design principles, I used the same patterned paper for two places on the tag plus on the larger heart, positioning it so it created a triangle. The stripe on the smaller hearts is similar in design to the swirled images along the bottom border, and they also create a triangle. My third triangle is the placement of the three hearts. The very bottom border of Candy Apple grounds the entire card and highlights the scalloped edge, drawing your eye so you see the fancy stitching. I used a gray marker to highlight "Friends" because it's the trend to add that swoosh and because gray is a neutral that adds interest without fighting with the rest of the color scheme.

Here's the supply list (with links for your shopping convenience):
I love tags on cards. Pretty soon I'll start showing you ideas with the new Fancy Tags, but many of you have already purchased Artiste or other CTMH Cricut Cartridges, all of which have some kind of tag. Let's make sure you're getting your money's worth out of them before we encourage you to spend more...although the stitched and pierced edges of the Fancy Tags is what pushed me over the edge to purchase them. Both the Fancy Tags and Decorative Borders are spendy, but remember you can always get them half-price if you host a party that goes over $250. With all the fun new things just released, I doubt you'll have trouble getting to that level if you know two or three people who enjoy crafting. Who knows, you might even be able to host your own party!

Until next time,
Becca
Posted by Becca-expressions at 7:30 AM