We moved into a new house a couple months ago. My craft area, while nice, needed some decoration. Craft On paper to the rescue!! 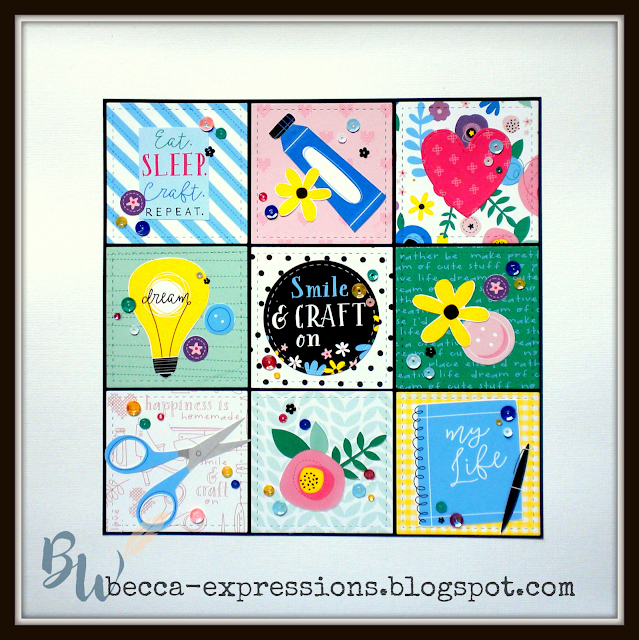 Now please don't think I came up with this idea on my own. I saw several similar ideas, but what I did was the cheap version. Where others used images of scissors, glue, and paint tubes made from the Crafting Shapes Thin Cuts, I used the cut apart sheet from the Craft On paper suite. Additional supplied I used include Stitched Square Thin Cuts, Stitched Circle Thin Cuts, and Stitched Heart Thin Cuts. After gluing down the cut out images onto the squares, I glued them to a 8.5+ a smidge square black piece of cardstock. I had an 8.5x11 piece which was just a fraction...like 1/16 of an inch...over 8.5, but that tiny bit of overage allowed me to just barely fit all of the squares over top with a thin border around and between them. I would probably have cut my black square to 8.75 square if I'd used a 12x12 piece of cardstock for the base. The border around the edge and between would have been larger but that would have looked just fine. 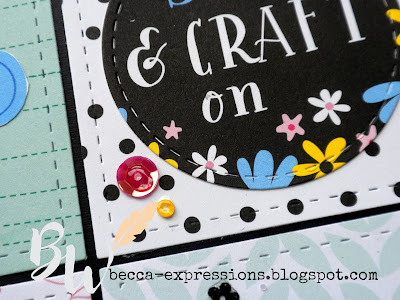 I glued the 8.5 square to a 12x12 piece of white cardstock and then added Craft On sequins. To make sure my sequins stay in place, I added a dollop of Liquid glass to the paper, placed my sequins over top and pressing enough for some of the Liquid Glass to bubble up through the center hole, then I added another dollop of Liquid Glass over the top. This under/over technique really makes those sequins secure.

I so love how this turned out. The fresh, vibrant colors - as well as the sentiments - bring joy to my heart.

The great part about this project is that, while the stitched die cuts are nice, you can create all of it with the Craft On paper, a paper cutter, a pair of scissors (plus maybe the bottom of a small jar if you want the center circle shape) and some glue. The "frame" here is just a border added via photoshop but represents how I plan to have it framed.

Until next time,
Becca
Posted by Becca-expressions at 4:34 PM