Hi everyone, it's Becca with my final Frosted Workshop on the Go post.  Today and tomorrow is your last opportunity to order it, so be quick like a bunny.

Speaking of bunnies, Spring is on it's way (though you wouldn't know it by the weather around here), and the color palate is very different than for Winter.  That doesn't mean you can't use your Frosted WOTG stamps.  Here's a card and scrapbook page using Blush, Honey, Pear, Sunset, and Lagoon. 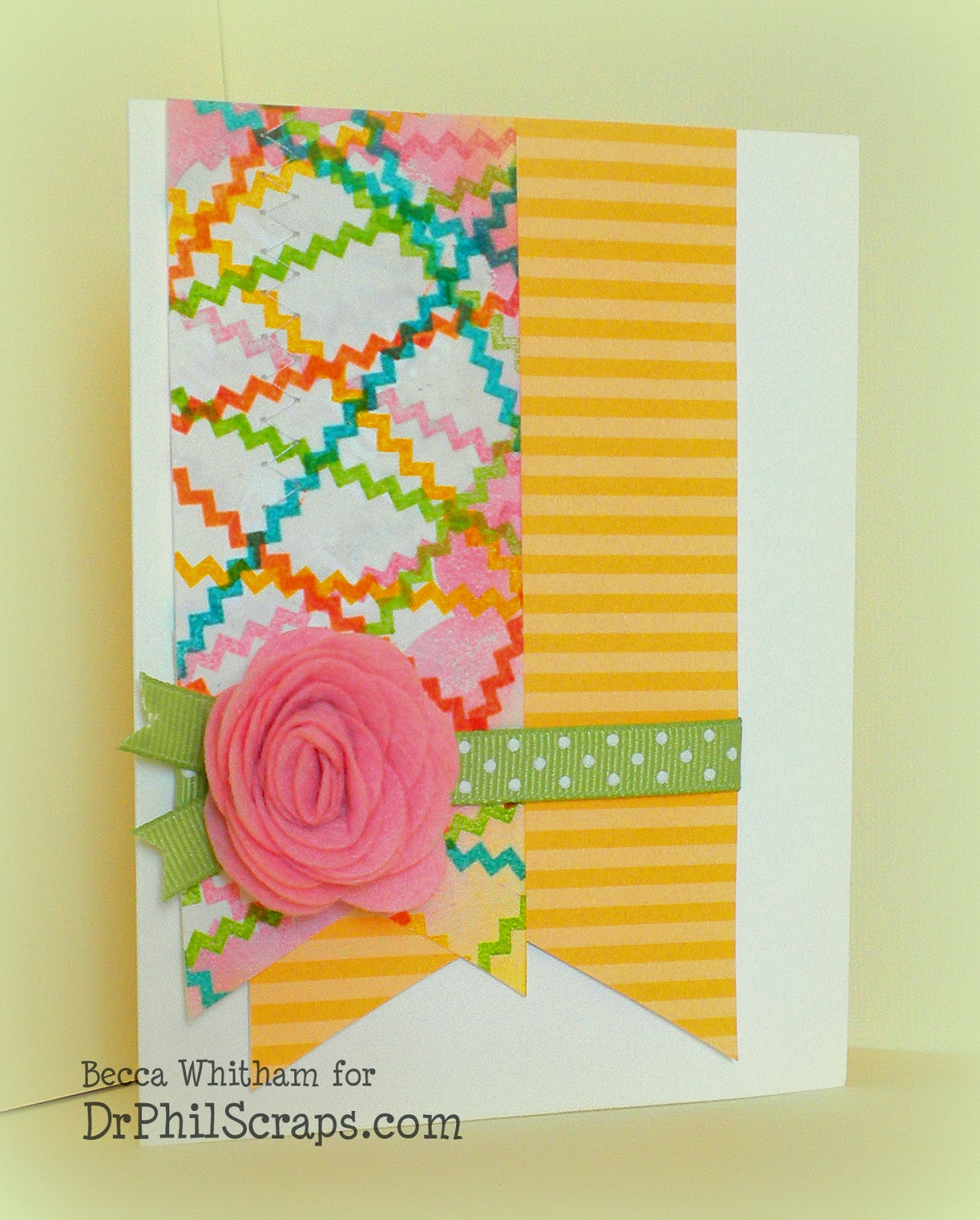 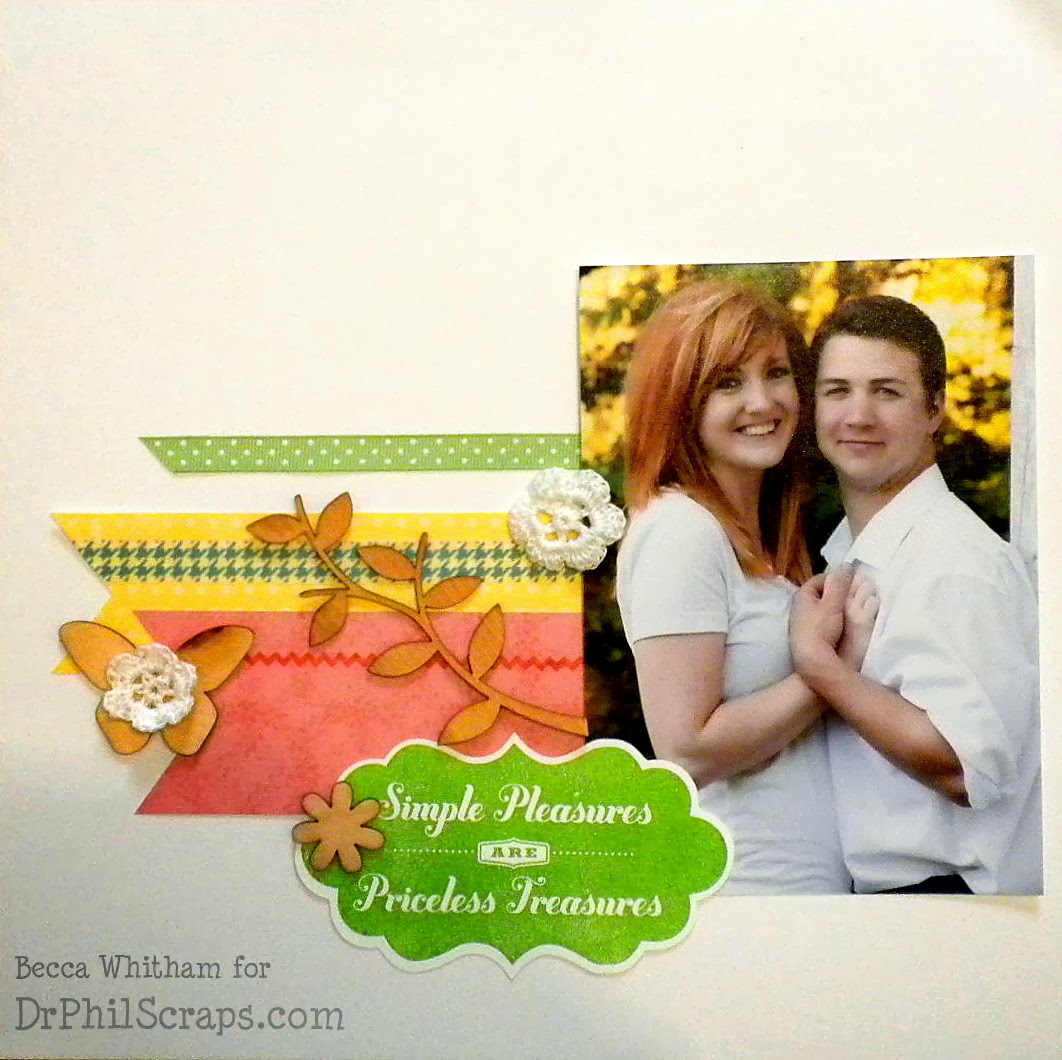 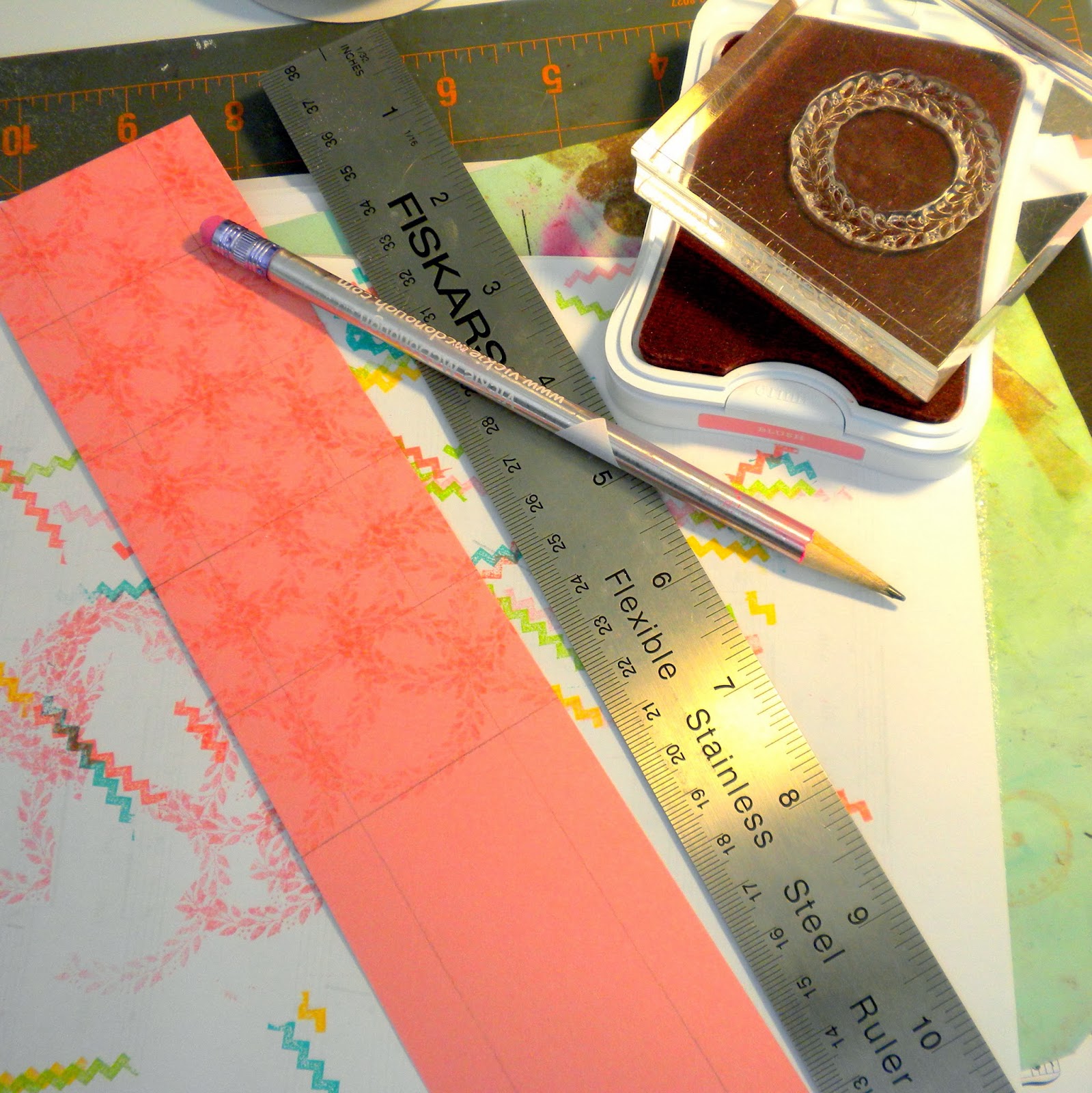 Using a ruler that's 1.25" wide, I drew pencil marks on a piece of Blush cardstock in a grid pattern.  I wasn't fussy about measuring to be sure my vertical lines were exactly centered, and then I crossed with horizontal lines using the top of the cardstock as my starting point.  I took the wreath and stamped in Blush ink so the X of the pencil lines was in the center of the circle.  After that, I went back over it and lined up the wreath's outside circle with the square pencil lines. When done, I erased the pencil lines and, voila, I've got a subtle background texture. 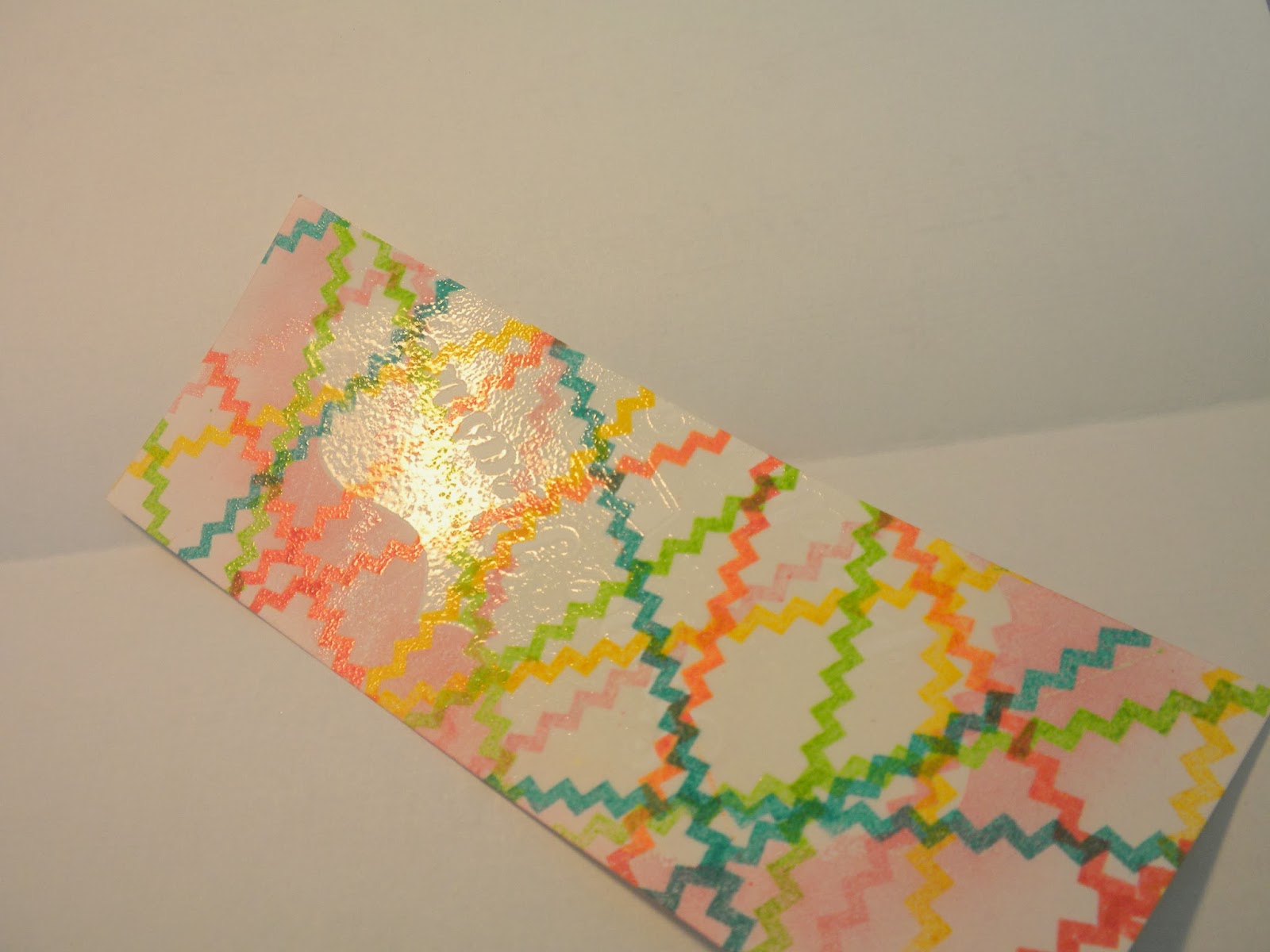 And here's an "in process shot" of the card banner.  After randomly stamping the ric-rack image, I clear embossed the large "Simple Pleasures are Priceless Treasures" sentiment over top at a wonky angle. Using a sponge dauber, I sponged Blush ink up to the edge being careful not to ink over the words.  (Note: this technique will also work if all you want is part of the sentiment, or the sentiment without the border. Just sponge over the part you want and leave the rest alone.) When I was done, I put a clean piece of printer paper over top and ironed away the clear embossed image.  You'll have to move the paper around and iron over top a few times to get the embossed image off, and even then there will be a slight residue.

A true CTMH enthusiast will think the yellow striped banner on the card and yellow polka dot banner on the scrapbook page came from an old paper pack.  Nope. 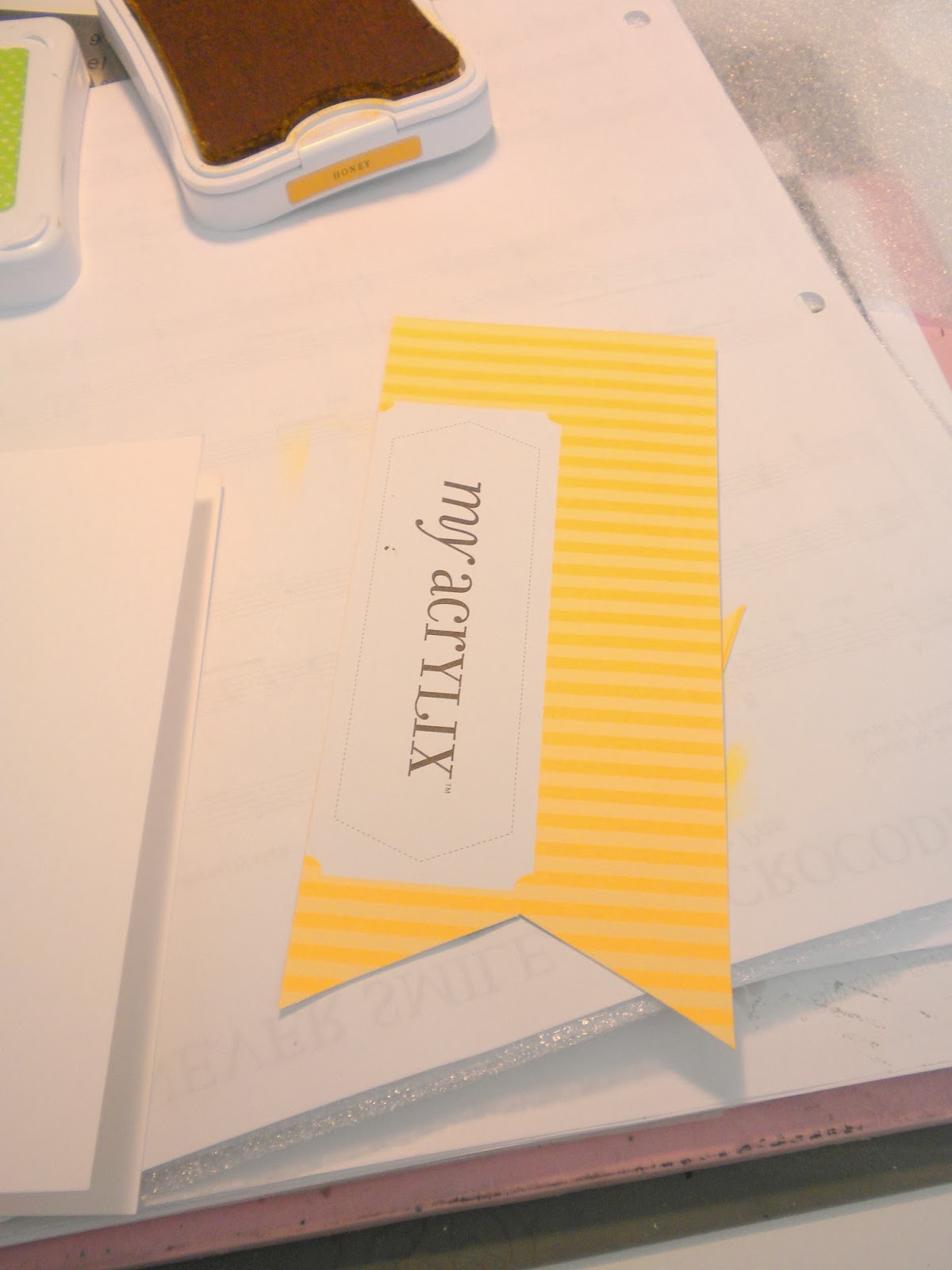 I was running out of room in my storage boxes and decided to remove all the papers from my stamp sets.  The double benefit is now I can see my stamp sets without having to pull them out of the storage box.  I also did some consolidating and weeding.  By the time I was done, my stack of excess stuff was eight inches high.  Room for more stamp sets!!

The yellow polka-dot was on thinner paper so some of the print from the back side (telling you how to care for your stamps) showed through.  No problem, run a piece of Lagoon Washi tape over top.

The small wood shapes on the scrapbook page are discontinued, so I included a link to the current pack with similar shapes.

Just because a set is called Frosted, doesn't mean it can only be used for cold weather projects.

Posted by Becca-expressions at 7:00 AM