A Punny Get Well Card 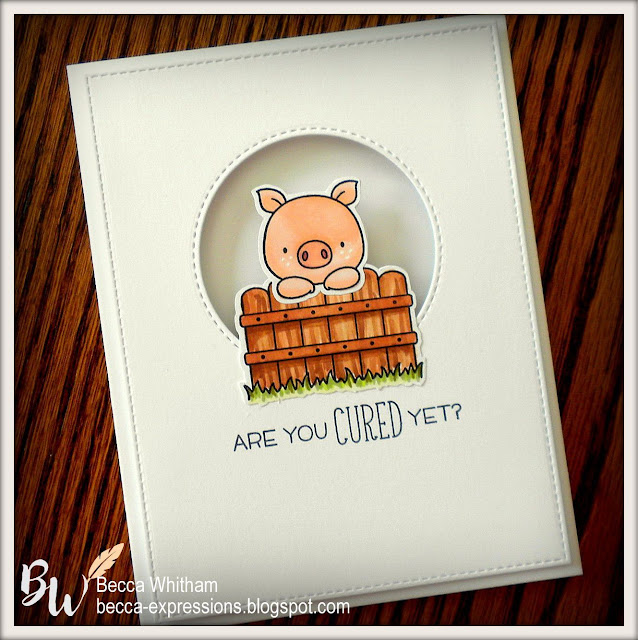 There's just something about a pig asking if you've been CURED yet that tickles my funny bone...and I needed a funny (punny) card for a pre-teen boy who's facing some serious health issues. I used MFT's "The Whole Herd" for the sentiment and "Hog Heaven" for the pig and fence. To carry the cuteness further, I did a flip side for when he opens the card. 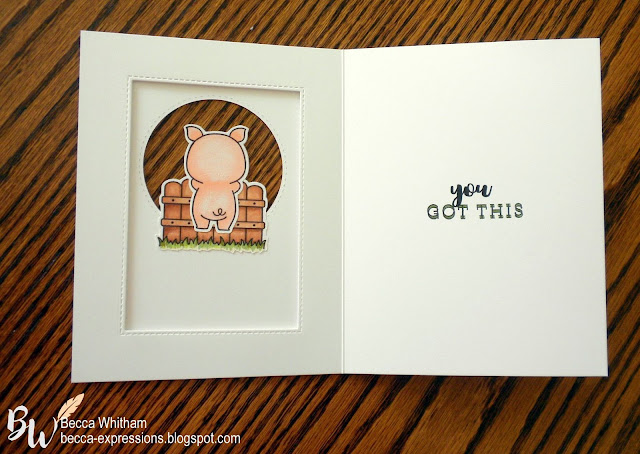 It wasn't until after I had the card photographed that I realized Mr. Pig needed something to stand on. I already had the trough from "The Whole Herd" stamped and die cut, so I colored it in grays, turned it over, and mounted it with foam tape for some dimension. I didn't photograph it because I'd already written something in the card and wanted to protect the young man's name.

It wasn't my intention to create a framed for the inside of the card. I usually do top-folding cards so they photograph well. I made the card and then realized my cute little backside flipped upside down(Doh!!) which ruined the effect. MFT's stitched dies to the rescue. I cut out the top of the card, cut and folded a new cardbase, die cut the center out of the left inside panel, and then mounted the pig imaged panel with foam tape. There's almost always a way to rectify a mess up.

The "You Got This" sentiment is from a CTMH disaster relief set that retires after TODAY. Here's a link to a post with a full picture of the stamp set including a shopping link. I started by stamping "GOT THIS" with my MISTI and, because it was a previously unused stamp, stamped it twice for full coverage...only my card slipped out of place and I didn't realize it until after I stamped. I decided to make it look like I planned it that way by coloring where the two images overlapped (see...you can even rectify two mess ups!). I then stamped the "you" twice, making sure it was stamped in the right place.

Off to work on edits for my friend. Her novel is due tomorrow and then she has to jump into another deadline. And I thought my deadlines were bad this year. She makes me look like an amateur!

Until next time,
Becca
Posted by Becca-expressions at 1:43 PM

Email ThisBlogThis!Share to TwitterShare to FacebookShare to Pinterest
Labels: CTMH, My Favorite Things