Color Dare 53 (and the patience of Job)

Okay...so I'm taking the Online Card Class called Summer Card Camp 2.  Day two had a very cool technique with masking off portions of a large sentiment to stamp words in different colors.  I've had an idea running around in my head about something similar using the chevron from CTMH's In the Background using this weeks Color Dare of Gypsy, Blush, and Sorbet.  I'm also entering it in the Moxie Fab: Birthday Challenge. 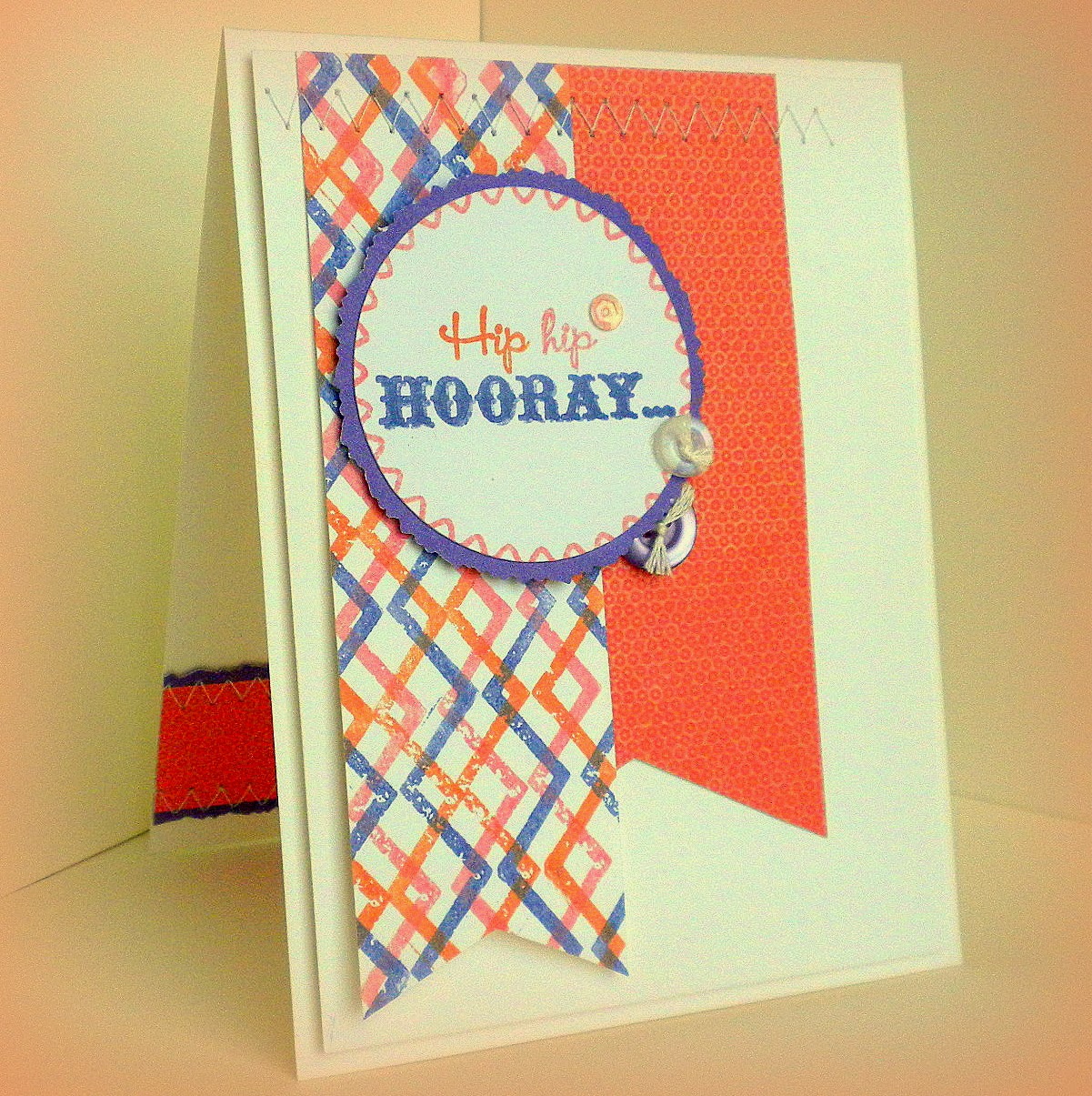 This technique required the patience of Job to achieve.  My original idea was to do each stripe of the chevron with a different color so the pattern would be the regular chevron but with individual stripes of the three colors.  It took me one layering to decide that wasn't going to work out.  Instead, I masked off all but the top stripe and stamped so the points of the chevron met in a diamond pattern.  I did all of one color and then worked the next.  It was a lot of work for background paper, but at least I'll be able to sleep at night now I've executed the idea.  Anyone else toss and turn with crafty goodness keeping you awake?

By the time I got one layer done, I had to trim off edges where the pattern didn't fully form.  What was left just looked like it needed to be a banner.  I went into my CASE file and pulled this card from Debby Hughes.  The second banner is cut from an old CTMH pack called Caboodle.

I decorated the inside of the card for two reasons:  1) Pam Korte of our CMH Design Team has been doing a lot with it lately and encouraging us to "finish" cards, and 2) because I messed up the inside sentiment and fixing it required an extra layer of work.  I like reason #1 better; let's stick with that.

After working so hard at the background, I thought I'd take a shortcut on the sentiment (CTMH Card Chatter-Birthday) and carefully ink up each word with the different colors.  The result was a faded "Hooray" at the point where the "Hip, hip" got really close.  I ended up masking off the top words and restamping "Hooray" again, which is why there's a bit of a shadow effect.  Okay...not the best, but it's okay.  (And not worth redoing the whole thing since I stamped the sentiment last over the top of a fully assembled and glued down circle.  Why do I do that to myself???)  Having learned my lesson, I decided to ink up just the "it's your" on the inside and stamp "BIRTHDAY" separately.  Which I then stamped crooked, hence the popped up overlay of "BIRTHDAY".  Yeah...  But, add a stitched border that matches the front of the card, and it looks like I planned it that way.

The Blush edge around the circle sentiment on the front of the card is from CTMH Connections (retired).  The sequins are actually white and colored with a Copic.  I'm not sure which color because I did them a while back just to see if I could.  The buttons were from my loose, fell-off-something-I-wore-at-some-point-in-the-distant-past baggie.  I used deckle edge scissors around the sentiment circle and the inside border.

In the future, I will use this technique on straight line stamp images.    Unless I see a curvy one that would be fairly easy.  Or maybe I could use Washi tape instead of post it notes.  It would curve or fit in small...

Straight!  Straight...do you hear me, straight!

Posted by Becca-expressions at 7:00 AM