Thank You Card with Hostess Only "She's a Wildflower" Set

As promised in yesterday's post, here's another card using the She's a Wildflower Hostess Only rewards stamp set. I'm tellin' ya, the current CTMH catalog has some fabulous hostess only stamp sets (including the hippo from this post). This is pretty straight-forward. The only thing you need to know is that the background image doesn't cover a full 4.25 x 5.5 size. So...I turned it sideways and stamped it twice. The image is so busy that it's really easy to line up edges. I colored with Prismacolor pencils then topped it with a panel of white cardstock cut with Rectangle Stitched Thin Cuts. I tilted the panel and trimmed off the edges.

The sentiment was stamped in Black Pigment ink then topped with Clear Embossing Powder...except I apparently have some white embossing powder mixed in with it. I was pretty unhappy with that but not so much that I decided to toss the whole card. New clear embossing powder is going on my shopping list! And this time, I'm going to make sure I use a dedicated container so I never get mixed powders again. Grrrr!! 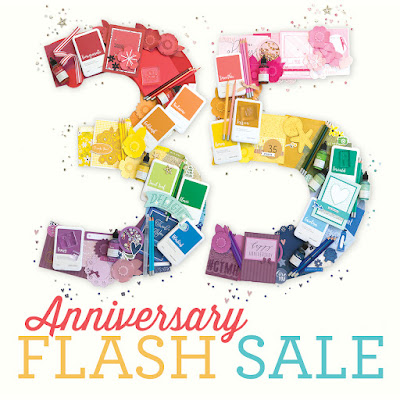 Hey...while we're on the subject shopping, this is Close To My Heart's 35th anniversary (which means they started up the same year my husband and I got married!!). To celebrate, they are having 35% off sale. It begins at 3pm MST on Wednesday May 29 and will run until 11:59pm MST on Friday the 31st. There are sure to be items which sell out fast, so get there fast.

Like it says, it's a FLASH sale and things go in a flash!

And if you - or you and friends - order over $150, you'll qualify for the hostess only stamp sets.

And if you come back tomorrow, I'll have another card for you using the hippo hostess rewards set.

Until next time,
Becca
Posted by Becca-expressions at 7:30 AM